The working principle of the three-way ball valve is to make the valve unblocked or blocked by rotating the valve. The ball valve switch is light, small in size, can be made into a large diameter, reliable in sealing, simple in structure, easy to maintain, the sealing surface, and the spherical surface are often closed, and it is not easy to be eroded by the medium. It is widely used in various industries.

Three-way ball valve has a T type and L type. The T type can connect three orthogonal pipelines with each other and cut off the third channel, which can split and merge. The L-type three-way ball valve type can only connect two orthogonal pipelines, and cannot maintain the third pipeline to communicate with each other at the same time. It only plays a role in distribution. 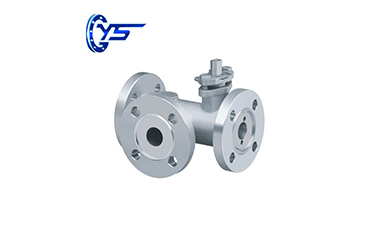 3. The three-way ball valve is divided into two types, single-acting and double-acting according to the type of action. The characteristic of the single-acting type is that once the power source fails, the ball valve will be in the state required by the control system.

The ball valve and gate valve are the same types of valves. The difference is that its closing part is a sphere. The sphere rotates around the centerline of the valve body to achieve opening and closing. The ball valve is mainly used to cut off, distribute and change the flow direction of the medium in the pipeline. 3 way ball valve price is a new type of valve that is widely used, it has the following advantages:

1. The fluid resistance is small, and its resistance coefficient is equal to that of a pipe section of the same length.

3. It is tight and reliable. The sealing surface material of the ball valve is widely used in plastics and has the good sealing performance. It has also been widely used in vacuum systems.

4. It is easy to operate and open and close quickly. It only needs to rotate 90° from fully open to fully closed, which is convenient for remote control.

5. The maintenance is convenient, the structure of the ball valve is simple, the sealing ring is generally movable, and it is convenient to disassemble and replace.

7. It has a wide range of applications, with a diameter ranging from a few millimeters to a few meters, and can be applied from high vacuum to high pressure.

1. In the closed position, the ball is pressed against the valve seat by the mechanical pressure of the valve stem.

2. When turning the handwheel counterclockwise, the valve stem moves in the opposite direction, and the angular plane at the bottom makes the ball free from the valve seat.

3. The valve stem continues to lift and interacts with the guide pin in the spiral groove of the valve stem to make the ball begin to rotate without friction.

1. When closing, turn the handwheel clockwise, the valve stem begins to descend and the ball leaves the valve seat to start rotating.

2. Continue to rotate the handwheel, and the valve stem will be acted on by the guide pin embedded in the spiral groove on it so that the valve stem and the ball will rotate 90° at the same time.

3. When it is about to close, the ball has rotated 90° without contact with the valve seat.

4. In the last few turns of the handwheel, the angular plane at the bottom of the valve stem mechanically wedges and presses the sphere to make it tightly press on the valve seat to achieve a complete seal.

Precautions for installation and maintenance

1. Leave a position where the valve handle rotates.

2. It cannot be used for throttling.

3. The ball valve with a drive mechanism should be installed upright.

Previous: Where Is the Check Valve Installed?